Use keyboard to navigate

In The Caves of Mt. Ida, BC is an interactive installation that depicts moments from an animal human hybrid’s life in its natural habitat. As an observer, the visitor will witness the mermaid-esque character, Mu, carrying out a daily routine of eating, napping and leisure. 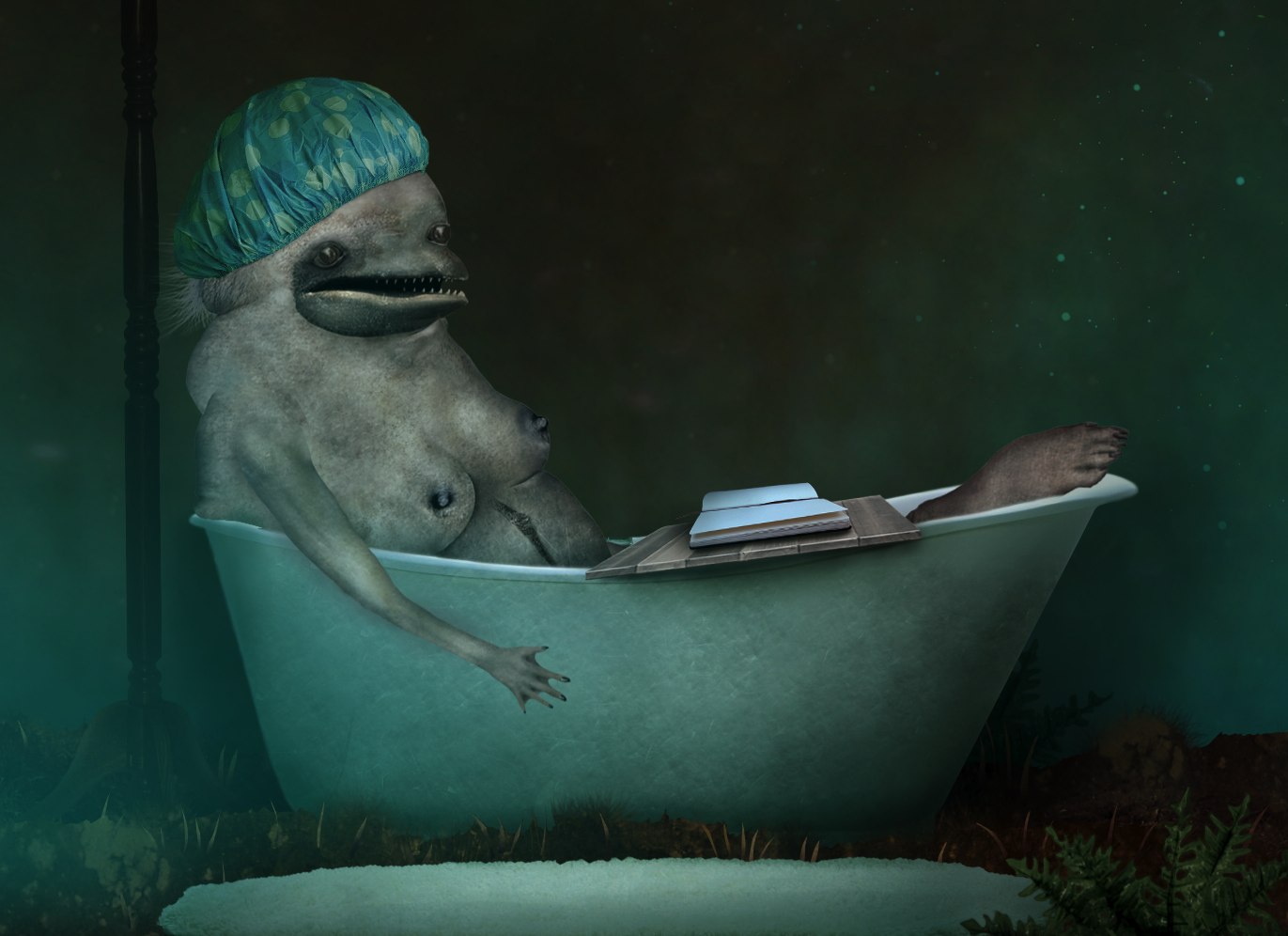 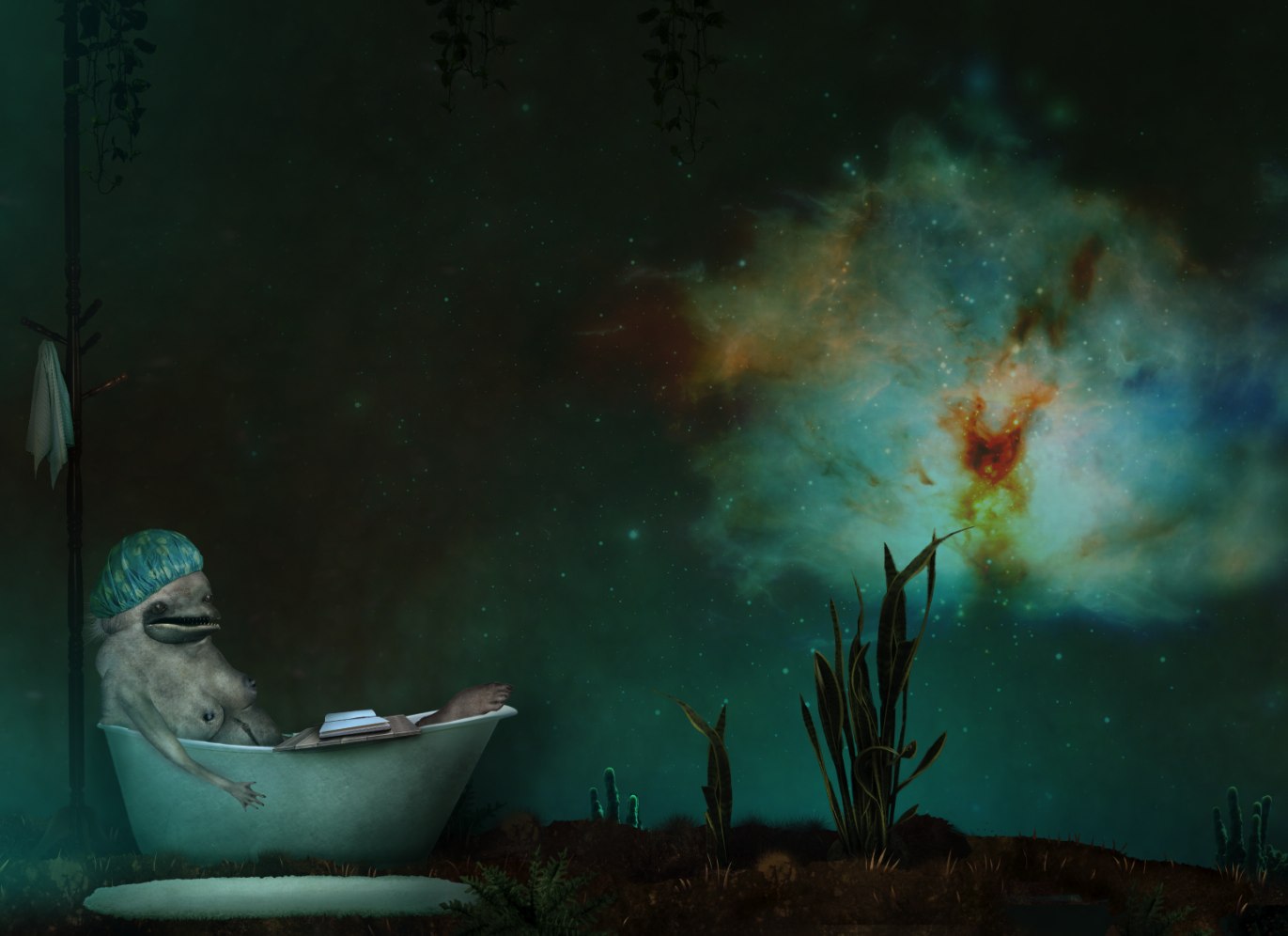 As composites, hybrids possess unpredictable natures that are intricate and convoluted. The merging of foreign species, behaviors and consciousnesses foster this complexity. They remind us of our core animal instincts and challenge the artificial, socially constructed boundary between human and animal.
In the process of generating hybrid characters, I have sought to understand how they are interpreted in stories and art. In his book The Open: Man and Animal, philosopher Giorgio Agamben deconstructs the role of man as a superior being and the effects of distinguishing humans from animal entities. Agamben utilizes the research of zoologist Jakob von Uexküll to explore various methods of understanding animals. Uexküll proposed that in order to comprehend animals we have to first identify their umwelt. Loosely translated from German, this means “environment” or “surrounding world” and is a term that Uexküll describes as a being’s internal environment-world, which exists conceptually from the point-of-view of the animal.

My method has been informed by Agamben’s theoretical interpretations of umwelt, which I use as a means to visualize and illuminate the hybrid, its actions and reasons for being.  The concept of umwelt also helps to establish the notion of the monster: if the hybrid is deprived of its basic needs, or carriers-of-significance, then the monstrous side has the potential to reveal itself.

Deprivation is of particular interest, as it results in revealing something seemingly monstrous. For example, if someone steals a dog’s T-bone steak, it could get vicious. If that dog is starving, it may even attack out of pure desperation. Yet, supply it with love, affection, food, water and a regular run in the park, and one hopefully experiences a tender side to the dog. The prospect of experiencing fear of the hybrid is one that must be acknowledged.

Beyond hybrids, it’s important to note that all species are capable of carrying out monstrous acts, of being a monster. Fear can arise at the thought of losing what is deemed important in one’s life, revealing the monster. The frightening notion is, on a primal level, that one might enjoy losing control. 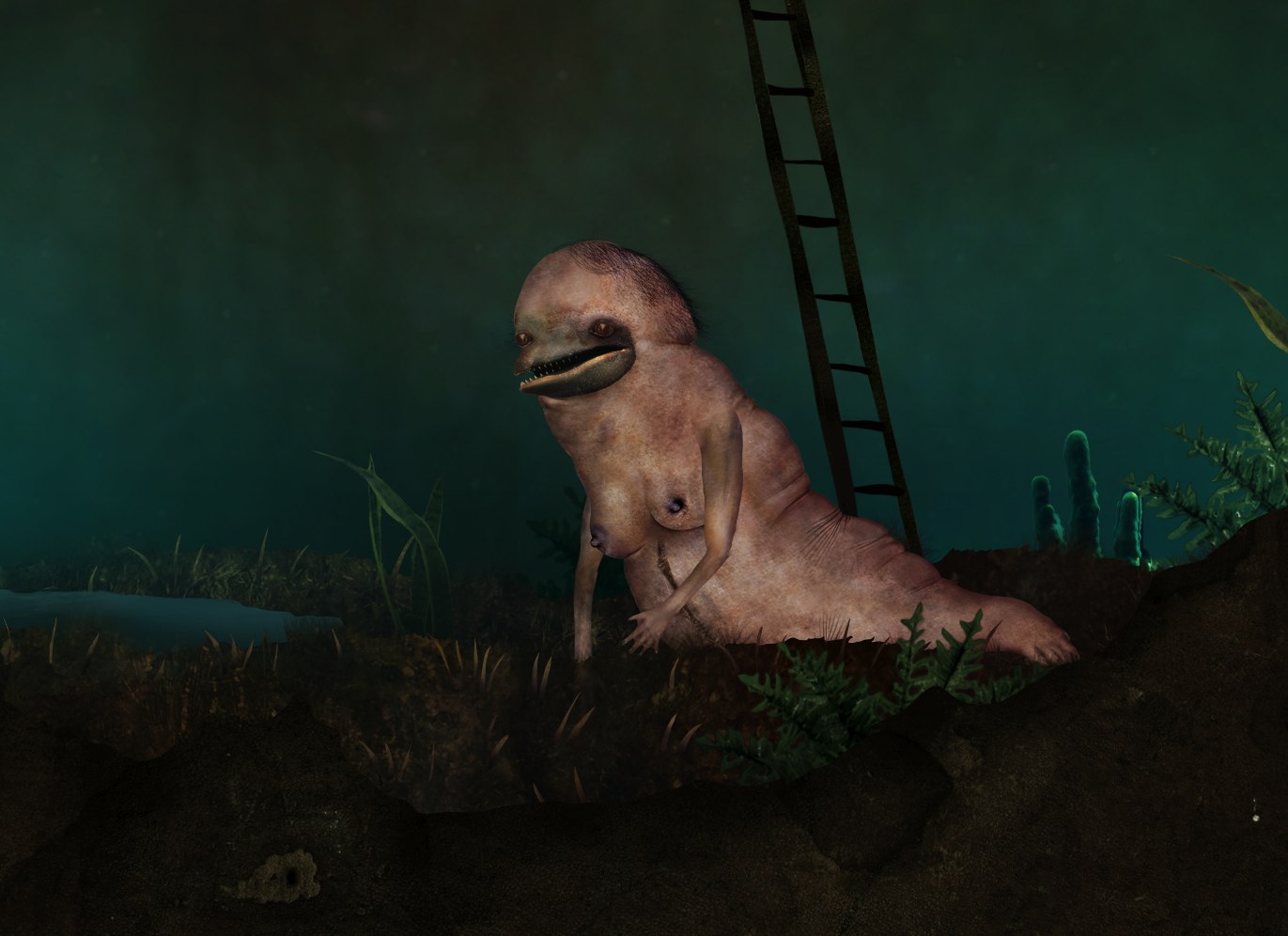 Questioning an anthropocentric point of view, Mu the hybrid serves as a muse to a self-reflexive process of discovery and understanding of my current art practice.  A non-gender-specific hybrid, Mu is constructed through various collage techniques. Hundreds of digital photographs are used in layers to blend seamlessly, producing a hyperreal quality within Mu and its world. Like a Dr. Frankenstein experiment, cat skin is blended with human flesh, and a dog’s tongue with a dolphin’s mouth.  Each layer adds different characteristics to the hybrid, exemplified in the animation when it growls like a bear and hisses like a cat. 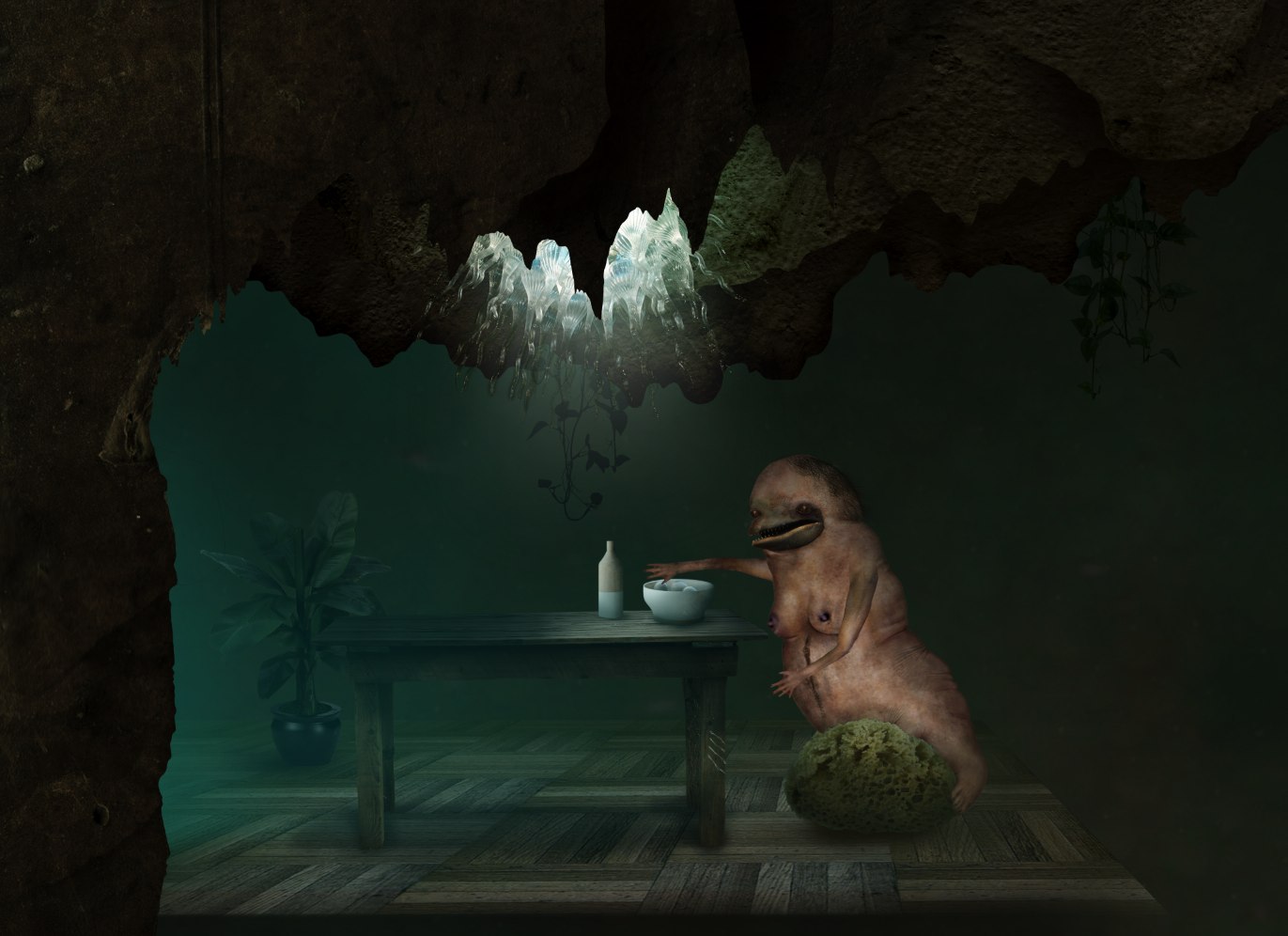 Mu’s environment plays an equal role in the work and is a hybrid unto itself. It is made with a similar collage process, combining underwater elements with those found above the surface. This is evident in the polyps of coral woven with various weeds and plants that surround a dining room table, and the entire environment is lit with a series of electric light fixtures. Mu sometimes crawls across the ground, sometimes flies, or swims from room to room. Mu is comfortably at home in its environment, suggesting that it has inhabited it for a long time. 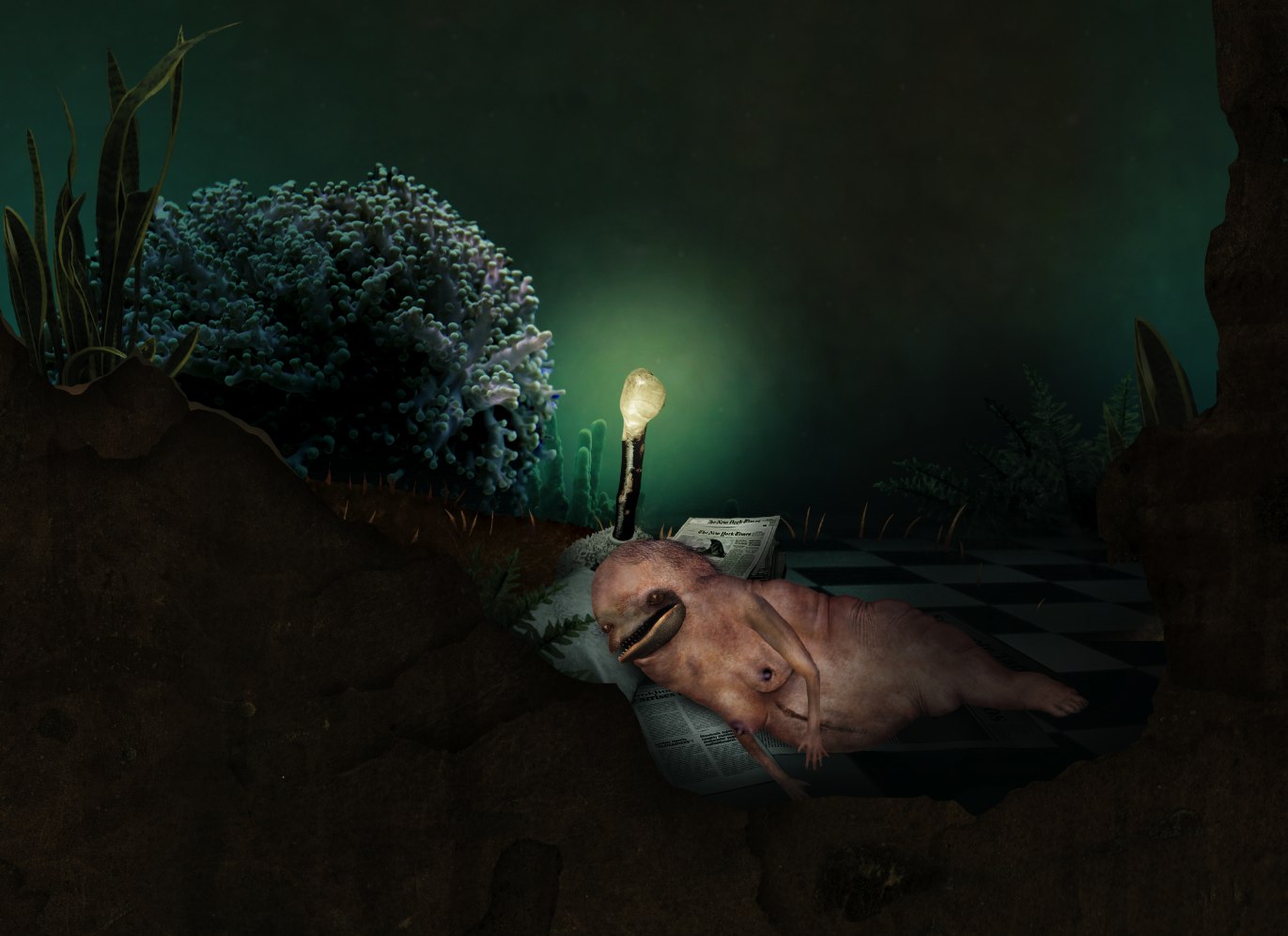 The viewer witnesses moments in Mu’s life as it carries out routines like sleeping and eating. Mu’s daily activities are the story, delivered in a random, unrepeatable sequence. 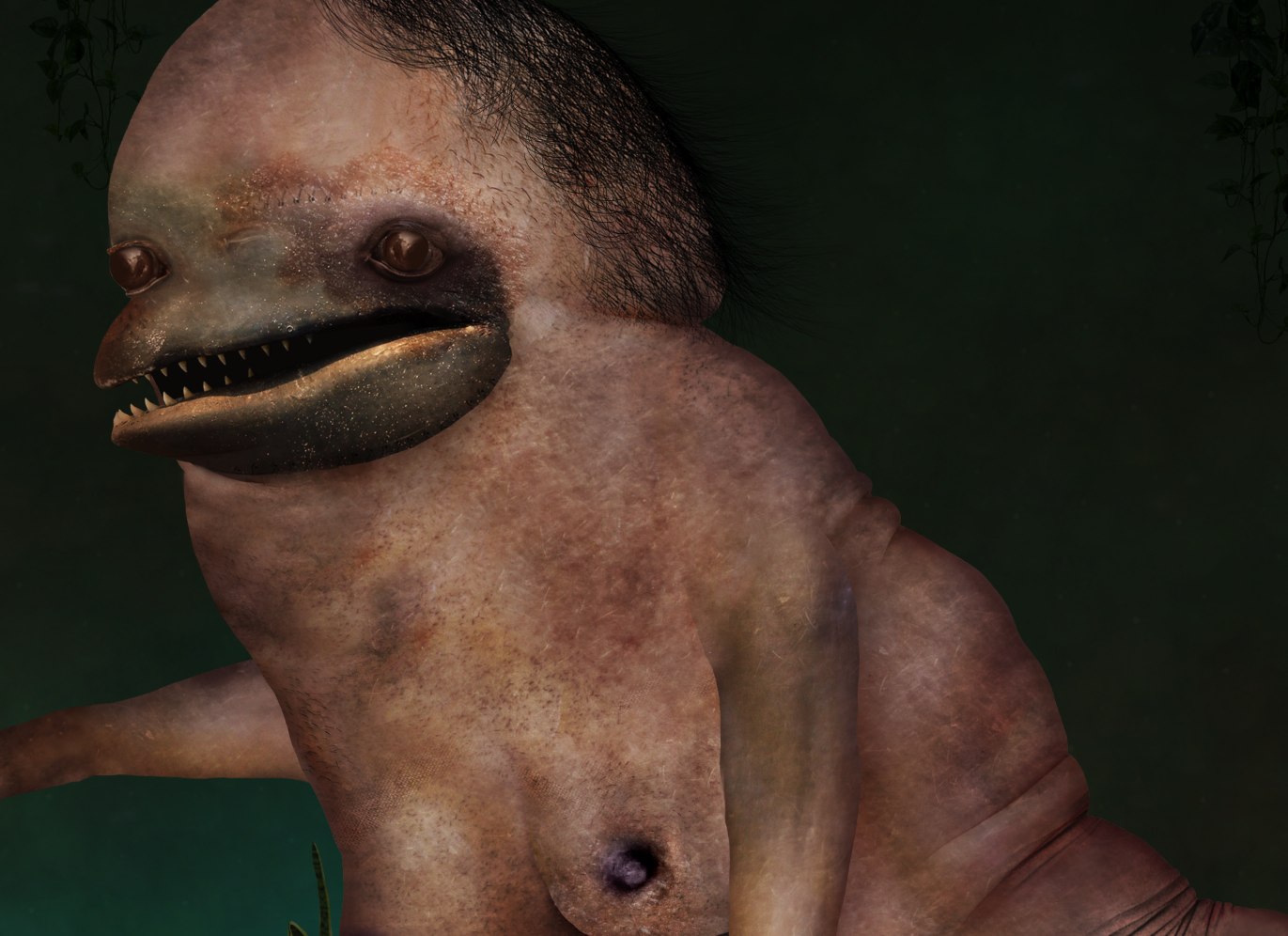 Notes:
(In The Open: Man and Animal, Agamben theorizes, “[t]he first task of the researcher observing an animal is to recognize the carriers of significance which constitute its environment”)